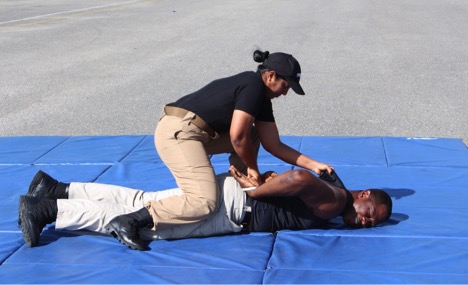 Wonder Women at the Prison Service

History was made in the Trinidad and Tobago Prison Service on Friday 15th December, 2017, as sixteen female prisons officers graduated from the first all-female Emergency Response Unit Training Course. The graduation of these officers signals the thrust of the Service towards operational integration of male and female officers. Traditionally, only men served as the officers in this unit. It marks the continued breaking of existing barriers relative to women in corrections in Trinidad and Tobago, as from 2016 several female officers were elevated to the executive ranks of the Prison Service.

The Commissioner of Prisons, Mr. Gerard Wilson, and his executive see the formation of this unit as a necessity to ensure the fulfillment of its mandate and continued protection of the physical and psychological safety of all clients of the T.T.Pr.S.

This also serves to assist with bringing the Trinidad and Tobago Prison Service into alignment with the United Nations Standard Minimum Rules for the Treatment of Prisoners with specific reference to incarcerated females.

The T&T Prison Service has upgraded its training policies to facilitate the creation of this all-female unit which will be stationed at the Women’s Prison; they have received equal training in special weapons and tactics as their male counterparts.

According to the Deputy of Commissioner of Prisons – Operations, Mr. Dennis Pulchan, “Women in the Prison Service have always served with passion and pride. There was careful planning surrounding the birth of this unit as it is designed to play a critical role in crime prevention, maintenance of prison safety and protection of both inmates and officers. They are highly skilled, efficient and committed and are a definite asset to the Trinidad and Tobago Prison Service.”